At the end of last year, with the support of my fantastic husband, I decided to take a much-needed break from the workforce.  2013 had been a particularly tough year, and I was determined to make a fresh start in 2014.  While it wasn’t easy quitting my job without the safety net of a new job lined up, the goal was for me to take a few months off to re-group and figure out what I wanted to do next. I quickly discovered a new sense of self and left the old troubles behind.

I spent a few months working on home projects and volunteering in my community, and around the time I might have started looking for a new job, my husband started considering a serious break from his.  We’d talked in the past about a “someday” cross country trip.  It was always difficult to contemplate and we had mostly had it in mind for after we paid off our condo (still some time before that will happen).  But, here I was, not working, and it occurred to him…why not now?  So he told me to not look for a job while he tried to figure out if this was something we could do. A quick chat with his bosses made it clear that maybe this was indeed the time.

Over the last few months we’ve been doing some casual planning and now it seems we’re really going to do this.  We researched many options for how to make this trip work, including these really cool, tricked-out vans from Escape Campervans  (which we quickly ruled well out of our price range for the trip we had in mind).  We jokingly considered the handy suggestion to buy a $44,895, 2015 Chevy Tahoe from OutsideOnline.com in their article “9 Car Camping Upgrades”. Neither seemed particularly fiscally responsible.

We finally decided that from a cost perspective, the only way we could make this happen was to take one of our cars.  Our choices?  My 2008 Honda Civic or his 2008 Volvo C30 Hatchback.  For a variety of reasons (including the fact that I would have had to finally suck it up and learn how to drive stick if we took his car) we decided to take mine.  Mine already has about 30,000 miles more than his, so what’s another 10,000, right?  We’ll likely be on the road when my car reaches 100,000 which will make it pretty special.

So, here’s our winner: 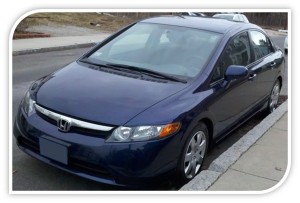 Stay tuned as we prepare for our trip.  We’ll be hitting the road later this summer!